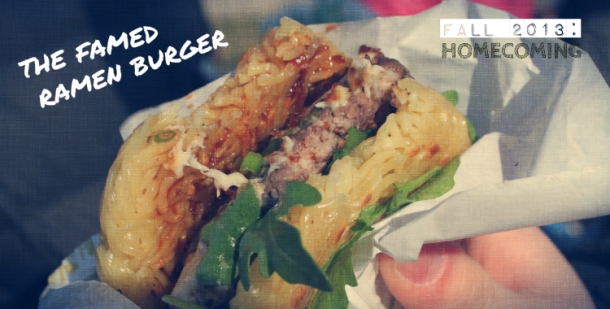 Under the Brooklyn Bridge

As the late November weather settles in, and the temperature nears a chilling 32o F, our love of food markets and street fairs is folding to the irresistible urge to hibernate. While most Columbia newcomers stick close to the Morningside bubble as they adjust to the cold, last weekend signaled a final chance to explore Brooklyn’s most enticing foodie beacon, Smorgasburg.

In an empty lot overlooking Williamsburg’s East River, Smorgasburg has been drawing impressive crowds since summer 2011, with 75-100 food and drink stands each Saturday at the East River State Park, and Sunday at Brooklyn Bridge Park. An offshoot of the much larger Brooklyn Flea Market, Smorgasburg showcases the culinary creativity of local cooks and foodie enthusiasts, having nurtured now-global favorites such as the Ramen Burger and Cronut. Devotees have waited in line for up to three hours in pursuit of that coveted bite.

On its closing weekend, before the harsh winter weather really sets in and the event moves indoors, I dragged my roommate and a fellow LA foodie off the island to get a glimpse of it all.  While my options were overwhelmingly plentiful, there were three vendors whose creations my taste buds couldn’t do without: the Ramen Burger, Red Hook Lobster Pound’s lobster roll, and Chedbread’s cheesy cornbread. While tasting each treat, I was lucky enough to speak with the people behind the stand to learn a little more about each vendor’s story.

Jack says he started “because I was a lawyer, my life was miserable and empty and I had to get out.”

Jack had a much-loved recipe for cornbread that was used at family dinners and during the holidays growing up. He used this as his model for his moist, decadent cornbread creations.

“Smorgasburg was the perfect venue for Chedbread as a launching pad. I wanted people to taste it here, I wanted the interaction, the whole experience of toasting the cornbread for people. It’s kind of like you’re at home.”

Next, Jack is looking for a production space in Brooklyn where he can also have a little coffee shop. Jack’s coworker says “world domination” will follow.

The Maple Bacon is made of toasted cornbread packed with maple syrup, thick, juicy bacon chunks, and sharp cheddar cheese. It’s a decadent mixture of salty and sweet. 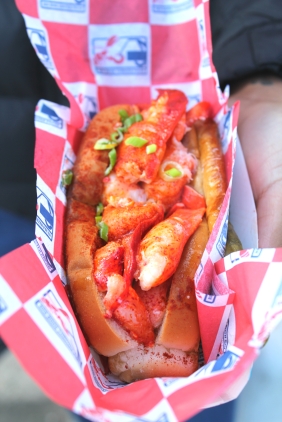 Husband-and-wife team Ralph and Susan thought that Maine lobsters were too good not to share in the food mecca of New York.

Having both grown up in Maine and Massachusetts, Susan and Ralph were raised in a rich lobster culture. Experimenting with classic forms of lobster, they discovered how to take their own twist on these favorites from their past.

“It’s ‘happening’, it’s a good scene where people always come. Smorgasburg is where we started before opening [our] restaurant; we started with these same rolls.”

Since coming to Smorgasburg, they’ve opened a new food truck and a brick and mortar in Red Hook, which they’re looking to develop further.

The Connecticut Roll is made with fresh, juicy Maine lobster slathered in butter then sprinkled with fresh scallions on a split bun. It’s nothing short of sinful.

After studying the art of ramen in Japan for 4 years, Keiko moved to NYC to open a ramen shop.  Although the shop didn’t last his love of traditional Japanese did. Combining these ideas with modern American, he decided to try the ramen burger with a test batch of 100 for a stall at Smorgasburg. When 300 people showed up, he knew he was onto something

The Japan style of ramen ‘burgers’ provided an inspiration for Keiko but he took it to the next level by making ramen buns that held together more cohesively, and by Westernizing the fillings.

Keiko found Smorgasburg through friends at Sun Noodle, a ramen noodle group based in New Jersey. His Sun Noodle friends had a booth at Smorgasburg, and Keiko soon realized “It’s a great place for us, so much good food in such a small area.”

Keiko was mysterious about future plans, stating only: “We’re definitely planning on expanding but also want to stay at Smorgasburg.”

The Ramen Burger is simple in construction yet rich in flavor, with hints of umami. It has a savory “secret sauce” atop a patty with fresh notes of scallion.  This sits on a bed of arugula and is held together between two chewy ramen buns; a perfect, flavorful balance. 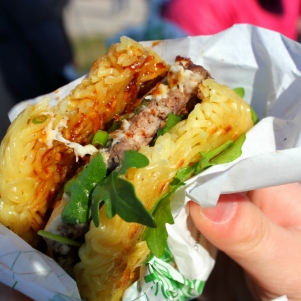 For the first year ever, Smorgasburg has moved inside for the colder months as part of the Williamsburg Winter Market, still with 75 food vendors!  Check out the action at 80 North 5th St in Williamsburg from 10am-7pm every Saturday and Sunday through to December 22nd and 10am-6pm for the rest of the winter.  In March 2014, get ready for when it heads back outside again.