New York’s delis are more than just a delicious lunch; Tanya Zeif describes how the deli makes history edible in the 21st century

Delis are like some lovers; they make you wait, feel unwanted, and yet provide a certain satisfaction of which you can never get enough. Take Russ and Daughters, a classic appetizing spot on the Lower East Side. 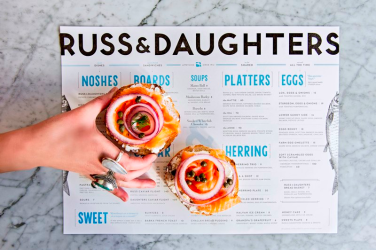 ‘The Classic’ at Russ and Daughters, courtesy of kosherlikeme.com

Walking in, you quickly realize that the fish is more important than you are – you take a number, wait to be called and stand with the horde of patrons in anticipation. Everyone is itching for that sweet, salty flavor of smoked fish and fresh cream cheese, in that New York Hurry where there is never enough time to do anything, let alone wait. Finally, one of the men behind the counter yells your number, and you realize that there is no time to decide between gaspe nova and belly lox, between plain and horseradish cream cheese: you’ll take one of each. And so the man shifts his distant gaze away from you as he gently removes that strip of pink fish, rippled with fats that carry B vitamins and omega 3 fatty acids, that imitate the soothing geometric designs of a raindrop splashing onto a body of water. And he slices it so slowly, so thinly, taking out the icky grey fat and carving a veritable masterpiece of deliciousness, nourishment, and history. And you take that fish, and you say thank you. 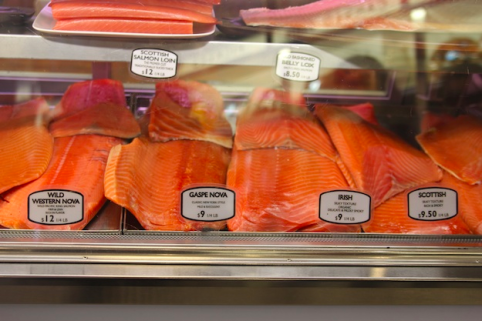 Smoked Salmon at Russ and Daughters, courtesy of kosherlikeme.com

What is the pull of the deli? Sophie Kovel, BC ’18, recalls trips to Russ and Daughters starting when she was “a very little girl and my head could barely see into the counter of smoked fish. The people that worked behind the counter would recognize me, and I felt like there was a rapport and connection that I could always return to—that would always be there.” Stanford Chandler, a student at Columbia in the 1940s, experienced the ultimate event of togetherness at the Stage Deli, when he met his wife, Denise Chandler, a Barnard Student at the time. One week, he went to the deli with a date and two extra tickets to Carnegie Hall. Chandler explains, “they would often sit you along a table with 2 other people. It turned out my date knew one of the two gals at the other side of the table, just from seeing them around the Columbia Barnard campus. So I asked if they wanted the tickets. After the dinner, my date and I head to Carnegie Hall, and lo and behold, coming through the seats, was Denise, my wife to be….We had a date the next night and we’ve been dining ever since.”

Delis were a place for everyone to grab a bite, a little microcosm of the city itself. Chandler recalls, “everybody went. You would stand in line with the Catholics on one side, Baptists on the other; no one thought about it.” Kovel explains “it’s not a leisurely experience, and that’s why I like it—because it is jostling and lively, and honestly a bit chaotic, but that very much seems like a small little pocket of New York.”

If these emblems of New York culture and cuisine are so special, what does it mean that they have been closing at a rapid rate? While there were thousands of delis in New York in the 20th century, that number dwindled to mere dozens by the 21st—largely because of exorbitantly high rents. Then again, the absence is felt. New spots, like Russ and Daughters Café,  Harry and Ida’s and Black Seed Bagels are popping up, injecting new life into the deli’s centuries-long history. For example, Russ and Daughters Café makes a mean chocolate babka french toast, celebrating the contemporary tendencies to turn everything into a breakfast food that can be eaten any time of day. Similarly, Black Seed’s beet-cured lox recalls both the beet salad you might get at Community and your Bubbe’s borscht, bridging your bagel between present and past. 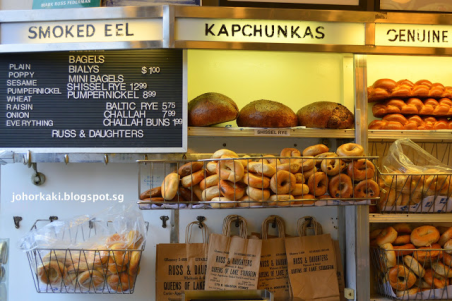 The Bagel Counter, courtesy of jokorhaki.blogspot.com

As Chandler revealed, delis were not an exclusively Jewish endeavor. While delis have become inextricably connected with American Jewish culture, it was in fact the Germans who brought the delikatessen to the US. In fact, pastrami was purportedly too spicy for many of the Jewish immigrants in the late 19th and early 20th centuries they worried that the peppery kick would lead to dreaded indigestion issues. One of the best bagel spots in New York—Morningside’s very own Absolute Bagels—in owned by Thai immigrants who came to New York in the 1980s. As Elizabeth Weil wrote in the New York Times article “Why is is so hard to get a great bagel in California?”, “Bagel baking remains the province of immigrants, even if it’s no longer particularly the province of Jews.” Once more, while a pastrami pilgrimage might offer more spiritual fulfillment than a night spent at temple for many Jews (at least it does for this one!), delis themselves have become an emblem of America—a country that, despite its  shortcomings, is a place with the freedom to be oneself, and the space to learn from others. Like the city itself, delis are edible history and gastronomic journeys for many New Yorkers, places where the interactions of all who have walked the city’s streets emerge into a physical monument that is good enough to eat.