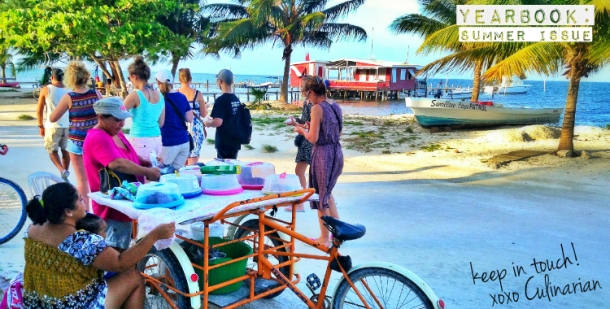 When everyone thought it couldn’t get any better than Wafels & Dinges, Culinarian stumbled upon The Cake Lady in Belize and real tacos in Mexico. From the looks of it, street food really is as good as they say it is.

There was a light breeze coming off the Caribbean as the beach shacks threw shadows further and further across the sand. Not a single car in sight, the loudest sound was the rustling of palm leaves overhead and the occasional call from local to tourist: “Go slow, man, you’re walking too fast, you’ll get a speeding ticket!”

Caye Caulker in Belize has to be one of the least likely places for someone to find a delicious slice of cake. Straddling the gap between the Mexican spice attack and the Guatemalan bean obsession, cake doesn’t fit the Central American culinary bill. Yet, wandering down the main walkway towards the other end of Caye Caulker, I stumbled upon The Cake Lady.

Every afternoon, in her bright pink shirt, The Cake Lady piles between seven and ten containers onto a makeshift table attached to the front of her bike, and rides her precious cargo from her home to Front Street. The first time I met her, I asked for a slice of her chocolate coconut pie, and four Belizean dollars later ($2 USD), I was slowly savoring the gooey chocolate, the crunchy coconut and the crisp, buttery pastry. It was addiction at first bite, and from then on I searched for The Cake Lady every day until I left the island.

The Cake Lady has been baking cakes and selling them on the street since she was sixteen. Now forty-two, she spends every morning baking sweet, sticky caramel pineapple cake, sharp and zesty key-lime pie, banana bread that stands tall and moist, chocolate cake smothered in caramel frosting, “chocolate-chocolate” cake smothered in chocolate frosting, and more. She then spends every afternoon watching each fresh slice disappear before her, and doesn’t leave until she’s all sold out. 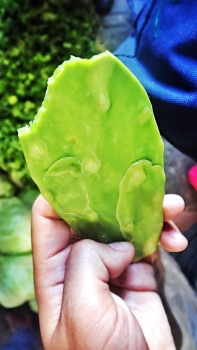 But why cakes? Surprisingly enough, Englishmen colonized Belize in the late eighteenth century and although it’s now an independent country, the decidedly western influences remain. The Cake Lady remembers her afternoons spent as a child in the kitchen baking with her mom. In fact, her memories of these baking afternoons were so vivid that she borrowed her mom’s best recipes, made a few tweaks, and started her own business.

The Cake Lady’s devotion to fresh, homemade and well-loved recipes unlocks the secret to street food in Central America. Whereas, in New York, I would often hesitate before ordering some indecipherable, plastic-tasting, emergency street-side sustenance, in Central America I would opt for street food above restaurant food. But that seems counter-intuitive. Why and how can street food be so reliably delicious in these countries? Moreover, why did I have to travel so far to find an incredible slice of cake? These were two recurring questions I encountered as my backpack and I made our way from Mexico City to San Jose for the summer. (The Costa Rican San Jose, that is.) And after two months of travelling, I have no doubt in my mind that of all seven countries—Mexico, Belize, Guatemala, Honduras, El Salvador, Nicaragua, and Costa Rica—there was one clear victor in the street food contest. Mexico, Mexico, Mexico, how do you do it?

Driving into Mexico City for the first time, I had a moment of panic. The driver stopped suddenly. The car behind us caught the bumper, jolting our car forward. I tried to enquire, but my Spanish skills left me with only one fluent sentence, and I didn’t need to know where the bathrooms were at that particular moment. The driver rolled down his window. A head peeked through the window from outside. At this moment, I saw my life flashing before my eyes. Ok, maybe that’s slightly overdramatic, but you get the idea: I was concerned, in a new city, utterly alone and stopped in the middle of nowhere in a car driven by a strange man. But then the head in the window flicked towards me, and with a toothless grin, murmured, “Churro?” The driver spoke to the man and passed back a golden stick, freshly-dipped in a thick, dripping, light-brown syrup. The name of this syrup, canela, translates directly as cinnamon, yet the syrup itself melted in my mouth like a light caramel. The churro was crisp on the edges, warm and soft on the inside: an absolute delight. And it very literally came from a toothless man at a set of traffic lights.

From there, I tried everything the streets had to offer. Frozen coconut water, crispy spiced grasshoppers, raw cactus, tortas, odd-looking fruits, and of course, tacos—endless mountains of tacos.

Taco stands are everywhere in Mexico, the stands covered by full marquees often being the more hygienic option. It’s been said time and time again, but there is obviously a wealth of truth in the statement: there is no taco like a proper Mexican taco. Sitting on little stools in the street, after pointing to the type of meat I preferred, I watched the servers pushing the ingredients from side to side on top of wide metal hotplates. Caramelized onion or small chunks of pineapple, every stand had its signature. The cooked concoction would then be set out in front of me on a corn tortilla, next to plastic bowls overflowing with salsas and sauces and tomatoes, radishes, cucumber, chilies, and limes.

The passion for good food displayed at these street stalls harkens back to the principles of The Cake Lady: fresh ingredients, well-loved recipes, dishes made by those who love them most. Restaurants often can’t measure up to this passion and devotion, especially when the scales are tipped further in favor of street food, where the dirt-cheap costs of running a street stall are far less than that of maintaining a building. If you have a recipe, you can become an entrepreneur, and can you take to the streets to test your idea of the perfect bite. This makes the streets a vibrant and sensory place to walk.