Prosciutto-wrapped Pork Chop with Mushrooms. (Not on the Restaurant Week menu, but it’s a good picture, no?)

Oh Jean-Georges, beloved of the Michelin guide and the New York Times. We investigate whether Nougatine, the petite concept one has to walk through to reach the actual Jean-Georges, is more than just an afterthought. (Or would it be a forethought?)

You know how a lot of restaurants have a little foyer with a bar? Well, Nougatine is that foyer, and in addition to the bar, also contains about 25 tables. Our party of four got shuffled into the middle of the area, right by the actual door to Jean-Georges, through which waiters disappeared frequently with the famous petit fours. We glanced wistfully at the booths near the window, facing Central Park.

I find myself curious about restaurant week menus. Nougatine’s haven’t particularly changed through the years, with certain dishes swapped out here and there. If you like your soup sour, then this one’s for you. For me, the lime was overbearing, and I like my croutons crunchy and less ant-sized, dammit. 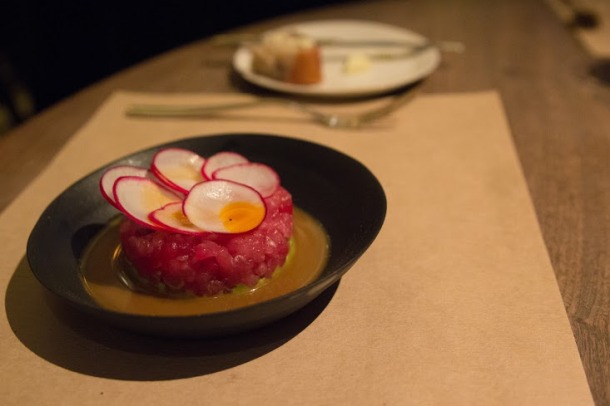 The Tuna Tartare is one of the few things on the Restaurant week menu that’s also on the actual Nougatine menu. I’m guessing it doesn’t take as much effort to prepare. It’s like having a huge portion of decent sushi, and I get really into it for the first few bites. But then the avocado mush starts blending into the tender tuna, which melds with the watery dressing a little too much. It all sort of slides straight from tongue to gullet. My teeth feel like they’re having an existential crisis. I start chomping radishes frantically.

This entrée, unlike the other option, the crunchy baked chicken, appears only on Restaurant week menus. It’s a big portion, and cooked well, but I can’t help but feel like I’m having fish sticks with potato chips. The ravioli are very nice, but make me yearn for the East Village where you have the freedom to call a couple of pierogi by their names and scarf them by the plateful.

And lastly, if you compare this picture to a picture of a regular menu entrée like the pork chop above, this looks like a sad washed out imitation of composition. The restaurant week dish just didn’t seem to have as much thought put into it in terms of color, the ratio of each component, and even in the garnish. What were those little green strands? I wouldn’t know, since I couldn’t taste them.

This is a Jean-George classic, and I was happy to see it on our menu. I actually got the crêpe cake (Eh, go to Lady M’s instead, or DIY.), but the cake is splendid. Hot melty chocolate and cool vanilla–I can see why it’s a classic.

Verdict? If purgatory were a waiting room, and that waiting room were Nougatine, I’d consider myself pretty #blessed. As a restaurant experience, it was fun to hover by the doorway of Jean-Georges and get peeps of the glory that is a three Michelin starred restaurant. But the question still remains, how do you create a menu that doesn’t force the restaurant to operate at a loss, remains true to restaurant standards, and gives customers the approximate experience of eating at the restaurant during times of normal operations? I found myself relatively uninspired by Nougatine’s Restaurant Week lineup, but between dodging waiters and people-watching, I was certainly not bored.