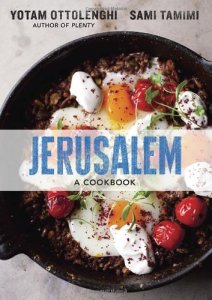 You Are What You Eat: The Importance of Falafel in Defining Jewish Culture in Israel

To become an even better host, prepare meals that not only please your guests’ palates, but also provide an interesting topic of discussion! Danny Li shares the significance of cooking Israeli cuisine through this short insight into a cookbook you will definitely want to try out for your summer parties.

Jerusalem: A Cookbook, by Yotam Ottolenghi and Sami Tamimi was published in 2013 and has since caught fire in the United States.  Israel’s cuisine holds great cultural and historical significance. In the pre-state period, food was used as a means of defining the nation and establishing the rightful return of the Jews. Following the inception of the state, food became a means of unifying the state. 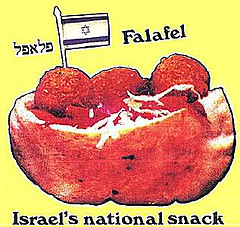 One such food is falafel, which was seen as the perfect representation of a new unified Israeli identity.  As a street food, falafel was more readily accepted by the Jewish community at a time when home cooking was seen as part of a bourgeois existence to be left behind in Europe.  In a well known image found on common Israeli postcards, cookbooks, and poster, falafel balls are found inside a pita bread pocket paired with the caption “Falafel: Israel’s national snack.” Stuck on the top of the falafel pile is an Israeli flag positioned in a way that connotes dominance or triumph, almost like an American flag stuck on the moon. This image shows the extroverted nature of falafel as a national icon.  Falafel’s growing fame was reflected in its appearance as the subject of popular songs such as Y. Zukerman’s 1949 “Falafel” or Dan Almagor’s 1958 “Ve lanu yesh falafel” (And We Have Falafel).

For Jewish Israelis, food such as falafel was used as a means of identity creation and preservation. The representation of food as cultural unity, cohesion, and collectivity underscores the belief that food importantly serves a common, shared purpose: to reaffirm one’s connection to the land, whether physical or ancestral.