A couple of months ago, The New York Times Magazine released an article detailing the positive health effects of ‘awe’. The research felt slightly futile to me. I can eat my vegetables and sprinkle flax onto my yogurt, but how can I ensure that I get a healthy dose of awe? The answer came this afternoon; Test Kitchen.

Rarely does a restaurant have such a unanimously positive reputation that I resist Googling the menu before arrival. Luke Dale-Roberts, a name that needs no introduction among Cape Town foodies, opened Test Kitchen in 2010. Since then, Test has garnered numerous “Best Restaurant” acclimations, including Best Restaurant in Africa and number twenty-eight on The World’s Best 50 Restaurants for 2015.

Nestled between a chocolatier and an artisan coffee shop, Test Kitchen resides discreetly in the garden of The Old Biscuit Mill; a sort of food-themed enclave in Cape Town’s southern suburb of Woodstock. Step through the doors and be greeted by that minimalist, warehouse-esque design associated with the chic and new-age. Exposed pipe and brick decorate the walls while what seems to be an iron door guards the entry. I knew from my one prior experience of fine dining that many an oblong-shaped, series of dollops and squares could make a meal here.

Dinner at La Mouette. Delicious, but many a dollop and square

However, my cynicism was put to shame when I smelled what was cooking. Warmth radiated from the kitchen. The inviting aromas of slow-roasted pork and onion-rosemary focaccia beckoned my two friends and I inside, causing me to nearly forget about my misfortune of a backpack. Thirty pounds and purple, I had lugged it along for my sociology exam that evening and braced myself for a sneer or two at this fine establishment. However, not even one disapproving glance was tossed my way. The staff at Test Kitchen was instead one of the friendliest and most eager to chat I had met, and only further kindled my reluctance to return to New York.

Patrons at Test Kitchen dined in jeans and sandals. If not for the excellence of our meal and chrome-colored platters, who would have guessed that we reserved our three spots at the bar two months in advance?

Considering the near impossibility of a reservation, we felt justified splurging on the 400 rand (a little less than 40 dollars) five-course lunch menu, and crossed our fingers that we would agree with our logic on a full stomach.

I’m still swooning. Following a platter of house-baked breads sprinkled with rosemary was the most visually perplexing collection of summer tomatoes. A fried green tomato, crisped into the image of a wagon wheel, lay propped against a skinned and roasted baby tomato with mint dressing and spanakopita mousse.

Can we call those tangle of potatoes french fries?

Next, arrived the scallops. Tender as pillows, they pulled apart into pointed strips and sat atop a bed of fermented tofu, onion crumble and roasted green beans.

So spartan. Yet so delicious.

The crème de la crème, however, was the main course and dessert;

Refreshing about Test Kitchen is its sincerity. While there’s no denying the pizazz and ingenuity of Chef Dale-Robert’s creations, there is something nonetheless simple about his menu. Aside from a poached quail egg bathing in potato skin puree and some slight confusion regarding the definition of Turkish Delight, singular flavors are forthcoming and identifiable. It was not the porcini and cherry foam blanketing a collection of foraged mushrooms that struck me the most, but the sheer freshness of a baby tomato, bursting with such unexpected flavor that I found myself with that strange and ephemeral feeling of awe. 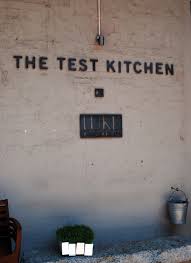 Test Kitchen’s excellence resides not only in the complexity and inventiveness of its creations, but also within the sheer quality of ingredients. If you are considering a trip to Cape Town in the near future, I recommend booking Test Kitchen with your flight.