I am a full-blown Momofuku fangirl.   Like, so obsessed that I spent half of my summer job earnings to scalp a ticket to the New Yorker Festival off of Craigslist so that I could see a talk from David Chang, Momofuku’s mastermind.  I’m also a champion of fried chicken, as I’ve had a long-standing love affair with chicken fingers.  So needless to say, when I first heard about David Chang’s newest project, Fuku, I was ecstatic.

Fuku is inspired by David Chang’s love and admiration of fried chicken and fast food.  The only three food items on the menu are a spicy fried chicken sandwich, fries, and a seasonal vegetable salad, but an off-menu variation of the spicy chicken sandwich topped with julienned daikon radish called the Koreano can also be ordered.  Fuku opened to much surprise and fanfare in Momofuku Ko’s former space on First Avenue last month, and since the opening, lines have routinely wrapped around the block of East 10th Street. 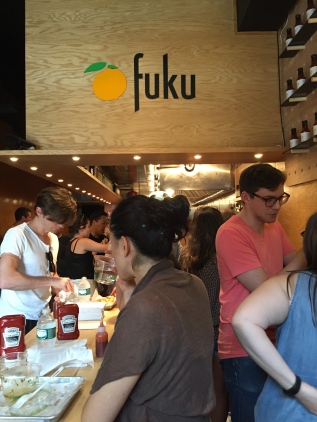 I arrived at Fuku around 2 P.M., after the main lunch rush, and the line was only about two people deep.  Inside, the tiny space was bustling with people crammed next to counters either devouring their sandwiches or waiting patiently for their assigned number to be called out and their food brought to them from the kitchen.  Lining the counters were bottles of Heinz ketchup and Ssäm sauce, Momofuku’s signature hot sauce.  After about fifteen minutes, my $12 lunch special consisting of a spicy chicken sandwich, fries, and a drink was brought to me by one of the Olympic-worthy food runners.

Taking my lunch to nearby Tompkins Square Park, I unwrapped the foil to reveal the behemoth.  At first glance it vaguely resembles a Chick-fil-A sandwich, with pickles and a squishy potato bun that is steamed and coated with fermented chickpea- infused butter.  The monstrous fried chicken piece is crisped and fried to perfection with an enticing secret mix of spices that adds just the right amount of heat to the sandwich.  The overwhelming juiciness of the chicken is enhanced by the contrasting crunch factor of the buttermilk fried coating.  Accompanying my sandwich was a wax paper bag full of potato wedge fries, seasoned and fried as expertly as the chicken with a slightly spicy blend of chili powder, salt, and pepper.  Both the sandwich and the fries were paired excellently with Ssäm sauce.

Though Fuku is starting with just one New York outpost and a streamlined opening menu, David Chang has teased of expanding Fuku’s menu.  Someday, he may even follow in the steps of fellow gourmet fast food spot, Shake Shack, and expand Fuku to a national chain.  But for now, when you decide that you cannot fathom one more kale salad or green juice, Fuku is the place to go to indulge in a savory fried treat.

Text and photos by Danielle Deiseroth